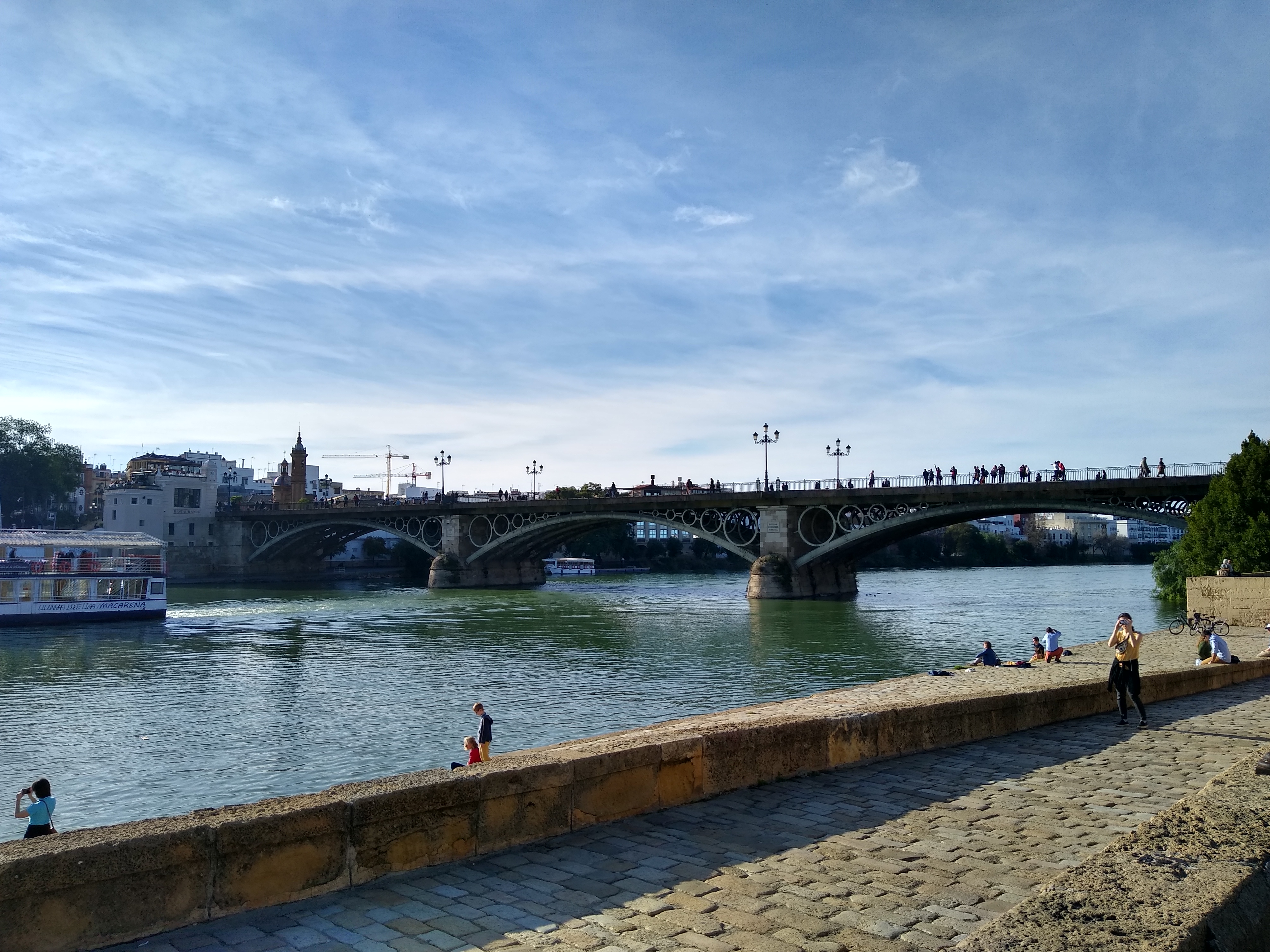 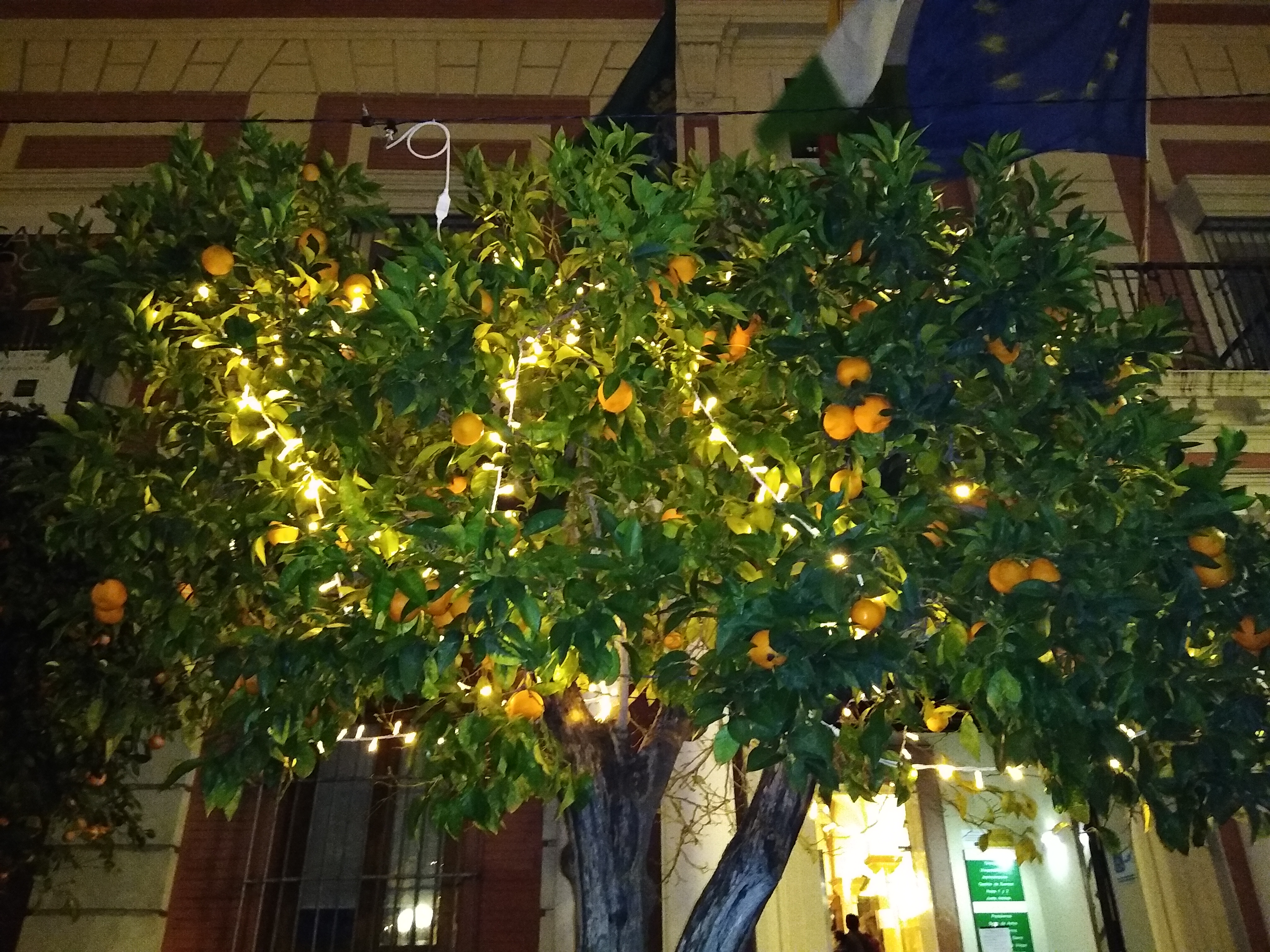 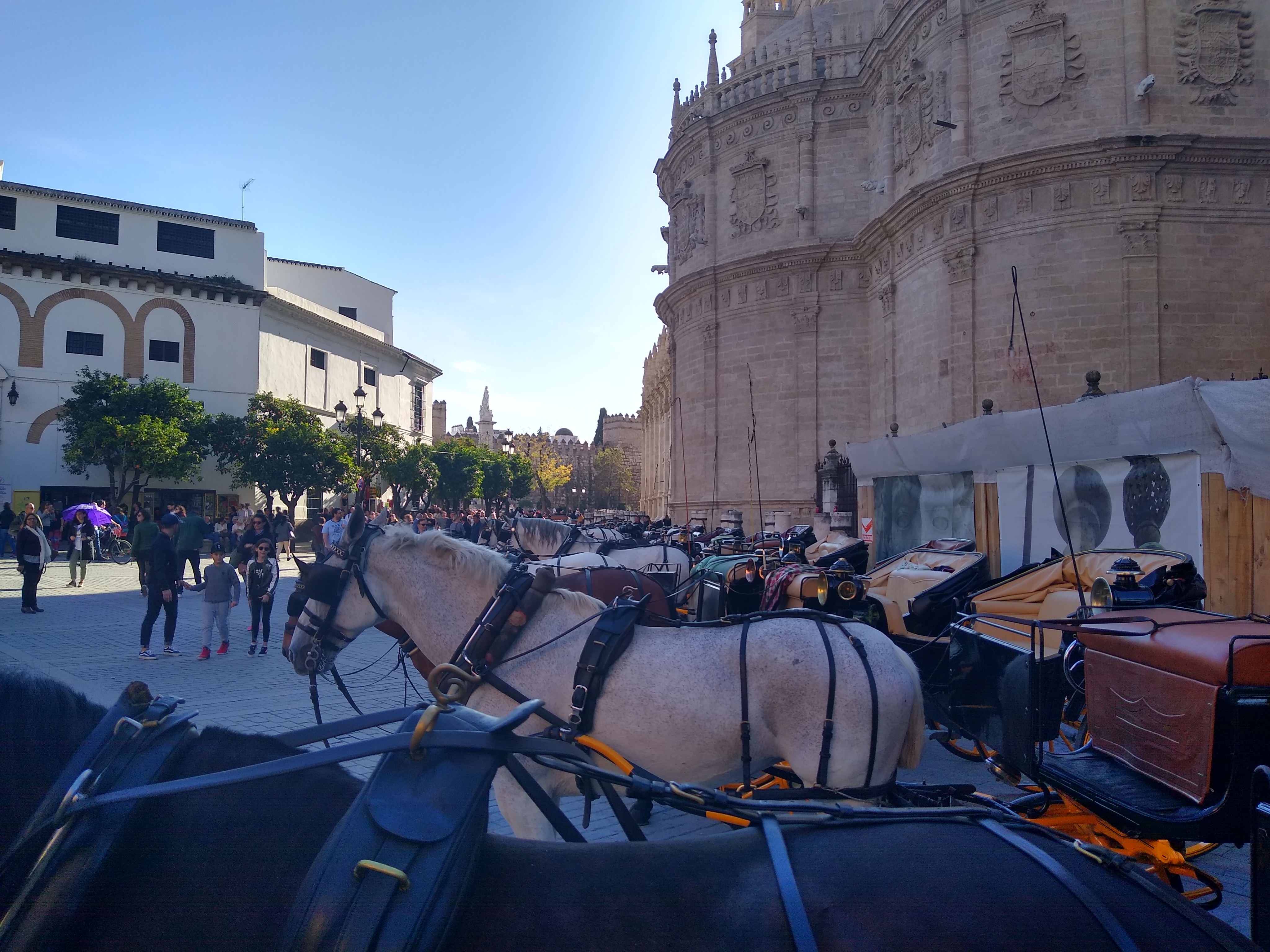 Seville – I learned quickly that a sturdy pair of shoes is a must. The streets and sidewalks are all uneven cobblestones. Tapas and ice cream of any kind are available pretty much everywhere. The grocery stores and coffee shops are less than a minute from our AirBnB apartment, with everything more expensive than I expected. The apartment has a dishwasher and clothes washer but no dryer (I’d rather have a dryer and skip the dishwasher if space is the issue). However, our place is in the center of the old town on a narrow street that can barely take a car. All of the pedestrians have to put their backs to the wall when one comes along. To relax among the crowds each day, I visited the store across the street. It is a variety store for household goods with about fifty birds in cages for sale (odd combination from a sanitation POV). The ones I latched onto are the four hand-fed cockatiel babies with color combinations of green, orange, white, and yellow. It took several days for them to turn from wet, barely feathered pink blobs, to beautiful creatures. Because they are in captivity, I believe their tail feathers are not quite as long as the ones flying free around the city and in the park. Speaking of parks, we loved the Parque de María Luisa 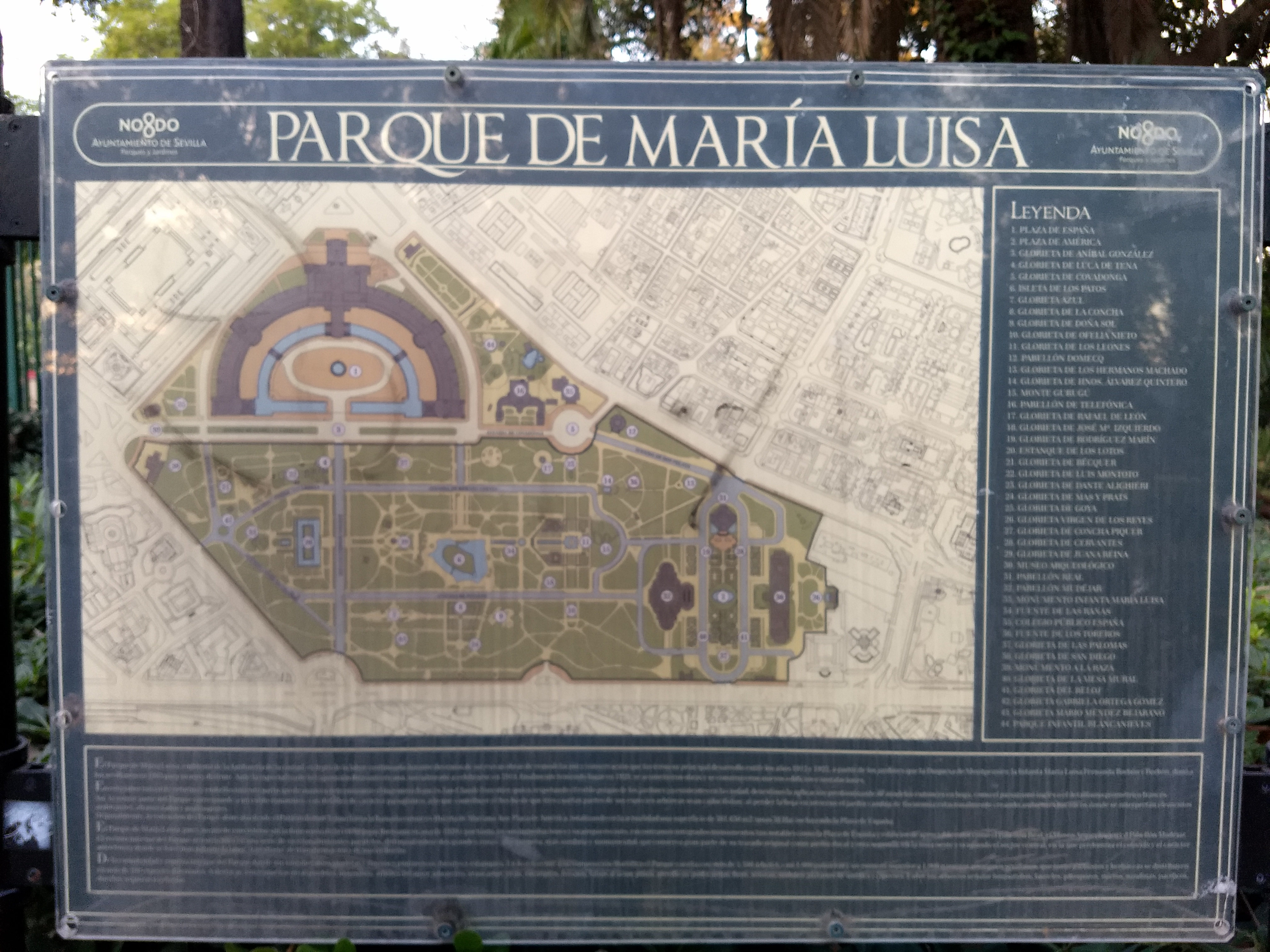 (website in Spanish – https://www.sevilla.org/servicios/medio-ambiente-parques-jardines/parques/parques-y-jardines-historicos/parque-de-maria-luisa) It is full of organized paths, water features with white pigeons, statues, and expansive landscaping with tiled or wrought iron benches placed at appropriate resting places. Through the widest areas, horses passed by us pulling tourists in carriages as well as bicycle carts with several people pedaling and electric scooters. The Parque (park), has a map on a placard to explain the routes on the 42 hectors (103+ acre) property, which opened in 1914, but it was conceived by the Duke of Montpensier and his wife María in 1848 (details can be found in Wikipedia – https://es.wikipedia.org/wiki/Parque_de_María_Luisa). It is located across from the Plaza de España, which is totally different and crowded with tourists. Both the plaza and the park are worth a visit.

END_OF_DOCUMENT_TOKEN_TO_BE_REPLACED

A middle-school girl walked into the building, but she was late by two weeks. It was the end of the day, and her last class would start in ten minutes. Creative writing was her favorite course. She quietly went into the room past the teacher, Ms. Marvel, who waited a moment to speak while maneuvering around the desk at the front of the room.

Shuffling through a clipboard of papers, she asked, “Mia? Aw, you’re not on my list.” Calling across the hall, she said, “Ms. Kraus, do you have Mia in your class?”

“Go to Ms. Kraus. I’m sure you can write volumes after your summer travels.”

END_OF_DOCUMENT_TOKEN_TO_BE_REPLACED

In 2016 I flew into Spain on my own from the USA and three years later in 2019 with my husband. On the first trip, I flew into Madrid and struggled through the metro system to my hotel. They kindly provided me with a room five hours before the normal check-in time. I went into the room and found a mirror. My face looked like a white sheet. The lack of sleep and the time-zone changed had taken their toll. I was quite woozy and crawled into bed for a two-hour nap. I wanted to explore Madrid when I awoke, but after fumbling about awkwardly trying to speak Spanish to acquire a meal, I had very little energy for site seeing.

The next morning, I had enough time to go to the Prado Museum in Madrid before making my way to Vigo, Spain, to meet-up with our daughter. The taxi driver wanted to talk, which I managed, but only in the present tense as I haven’t a clue how to speak Spanish in any other time frame. I meant to discuss the pilgrimage walk to Santiago from a trip years before, but he thought I was talking about a current trip. On the bright side, he did understand me.

END_OF_DOCUMENT_TOKEN_TO_BE_REPLACED

Sadie couldn’t quite decide who to invite to her party, but she wanted to fill her small Georgetown home to the brim. She wrote twenty names on a piece of paper and planned to ask each of them to bring a friend. After the hardships everyone had experienced, she wanted to do something festive. Perhaps some match-making to lighten up the mood. She picked up the telephone and called all her guests rather than sending them the usual formal written invitations.

They came to the door in groups of two or four at a time, climbing gingerly up the outer stairs as they talked among themselves. World War II had put deep wounds in their souls, whether they had been at home or overseas. The connection between them was there, even if they had just met.

The house was crowded, and the guests bumped into each other with their cigarettes perched in one hand and an alcoholic drink in the other. Some of the men wore tailored suits with ties, and others wore their military uniforms with medals and rank precisely placed. The women all in dresses, not a one in trousers, with their hair in large cascading curls, pulled back in various degrees with bobby pins and make-up concealing their true complexion.

END_OF_DOCUMENT_TOKEN_TO_BE_REPLACED

Sleep-deprived from two flights to Germany. One from Denver; four hours. The second from Dulles Airport; 8 hours. During the overseas portion, I watched three films while sitting sandwiched between two tall men of markedly difference girths. I cried when I watched ‘Racing in the Rain,’ and neither of the men noticed my nose horn going off. The other films aren’t even worth noting. I was supposed to sleep, but the cramped quarters squelched my desires. However, I managed to pull out my laptop and type with my shoulders compressed. This task will likely produce some sore muscles in the future.

In München we went through security at eight in the morning with no one in line before us. The guard looked at my passport and asked me if I had a German one as well since he notices I was born in German. No one had ever asked that before. He didn’t inquire about why I was visiting his country.

END_OF_DOCUMENT_TOKEN_TO_BE_REPLACED

Time with the Rickel family (my mother Gretchen’s ancestry). This is an excerpt from a writing I stumbled across. It sounds very much like what I’ve heard about my Grandfather Armin’s father. I made a note or two in ( ) throughout. I am unclear as to who the author of this work is; might be Walter Pitkin-1940s.

The Rickels lived in a big brick house on the northern side of Adelaide Street. To us, of Fourteenth Street, it was a king’s palace. Yet, it was only a comfortable dwelling with high ceilings and many rooms, all furnished well but plainly.

One by one, the family appeared. First the mother, a sweet, simple woman who reminded me in some ways of my own mother. Then the two oldest brothers, both so much older than I that to them I was just a kid. They heeded me little. Then Martha and Armin, the two youngest. Martha was a darling of eight or nine years; I quite fell in love with her. Armin was a clever boy with a bright smile. He won me, too, on the spot. All was well. Yes, but what was that noise outside?

A harsh noise. A loud noise. A noise from a human throat. A noise indicating anger. And so, in came Mr. Rickel, lord of the manor. A small, slightly bent man, with thin, tight lips, he was trying to shake off a bad tempter. Somebody who had come up the walk with him had enraged him, and he did not try to suppress his fury.

END_OF_DOCUMENT_TOKEN_TO_BE_REPLACED 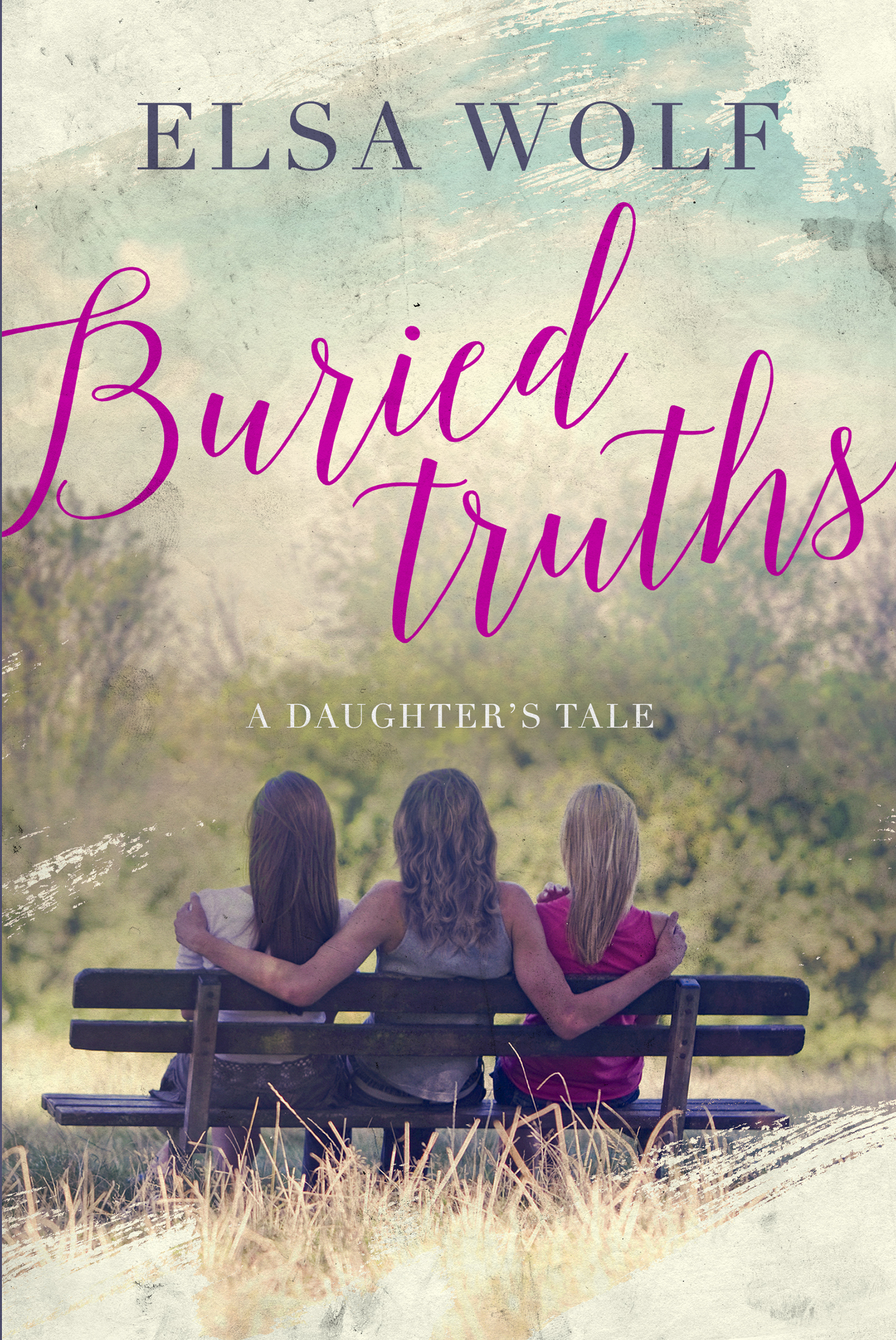